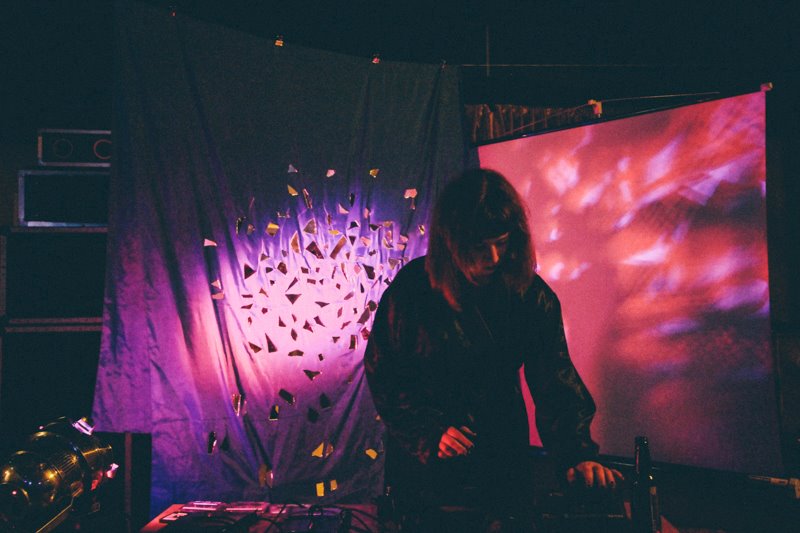 With your hosts John W. Fail and Tuukka Asplund

RED BRUT is Dutch Marijn Verbiesen's solo project. Verbiesen also plays drums in no wave-duo Sweat Tongue and synthesizer in JSCA. She is also a very active promoter in Rotterdam. Red Brut creates it's collages using withered flea market cassettes, Korg MS10-synthesizer, cheap keyboards, ethnic instruments and household items as sound sources. The soundscape may seem chaotic, but is however very structured at it's core. Red Brut's music succeeds in being threatening, naïve and playful at the same time.

ILPO NUMMINEN uses a synthesizer to create meticulously structured, multi-direction bending glitching. The soundscapes are warmly hypnotic and include immense details. Characteristic for Numminen's music is it's joyful and inspirational qualities. Numminen also plays in the group Pitches and runs the cassette label Pai.

According to herself DRAAMA-HELMI "raps incoherently to pretty experimental backgrounds". Draama-Helmi combines experimental music's elements and freedom to rap's certain kind of humor, wit and speed. Her lyrics are straightforward, macabrely funny and momentarily even a tad vulnerable. Cinematic flair and old evergreens also serve as strong influences. This not only presents itself lyrically, but also musically: One track samples Metro-girls and the beat producers have been instructed with e.g. "30's Hollywood-exotica". The May 2015 released, long since sold-out cassette "Draama-Helmin Erehdys" ("Draama-Helmi's Lapse") is her only release for now.

PYMATHON was established in Turku in 2005, which plays improvised thrash-metal. The band only plays and never rehearses - in doing so they believe that they will "always be a demo-level band". They also believe that "the thought of playing and rehearsing metal is pretty much laughable". In Lal Lal Lal Festival the group performs in a celebratory form as a quartet: Jaakko (drums), Topias (kitara), Tommi (noise) and Atte (vocals). Pymathon kommer, Pymathon killer!

KUKKIVA POLIISI (Flowering Police), the earth's nicest cop! Five or four members, adequately detuned, always happy but from time to time melancholy. Playful, exciting, toe-tapping-y, diving from stardust since over ten years! Kukkiva Poliisi mostly improvises acoustically. The groups musical discourse is rhythmic and meditative. In addition to traditional instruments they use children's instruments, toys and found objects. The shows are performative and they often include visual projections. Visual aspect is also created with different costumes. Kukkiva Poliisi was born in 1999, but the group was most active in 2001-2007. The five-piece performed after a multi-year break in 2015 twice: In Turku in children's modern art festival and in Helsinki.

The thought from a saxophone orchestra was conceived, when ANTTI TOLVI started composing multi-channel sound. He noted that wind instruments fit in the particular meaning excellently. The instruments may react to space and move in it freely. In addition concerts can easily be organized in almost anywhere. At first the compositions were relatively specific. In time, when mutual sound started presenting itself, could the portion of improvising be improved little by little. The composition is comprised of six modules, of which each include their own bylaws. Moving sound sources, the wood winds' rhythm and their freedom contribute to the spaces all-encompassing, breathing cadence. The tenor-saxophone quartet include features Ville Jolanki, Matti luokkanen, Sami Pekkola and Antti Tolvi.

MUSA DWARF presents a whiff of the desert and a health station: field recordings with random flutes and keyboards. The duo has operated in a multitude of instances over the years, and their music exudes friendship and enjoying the moment.