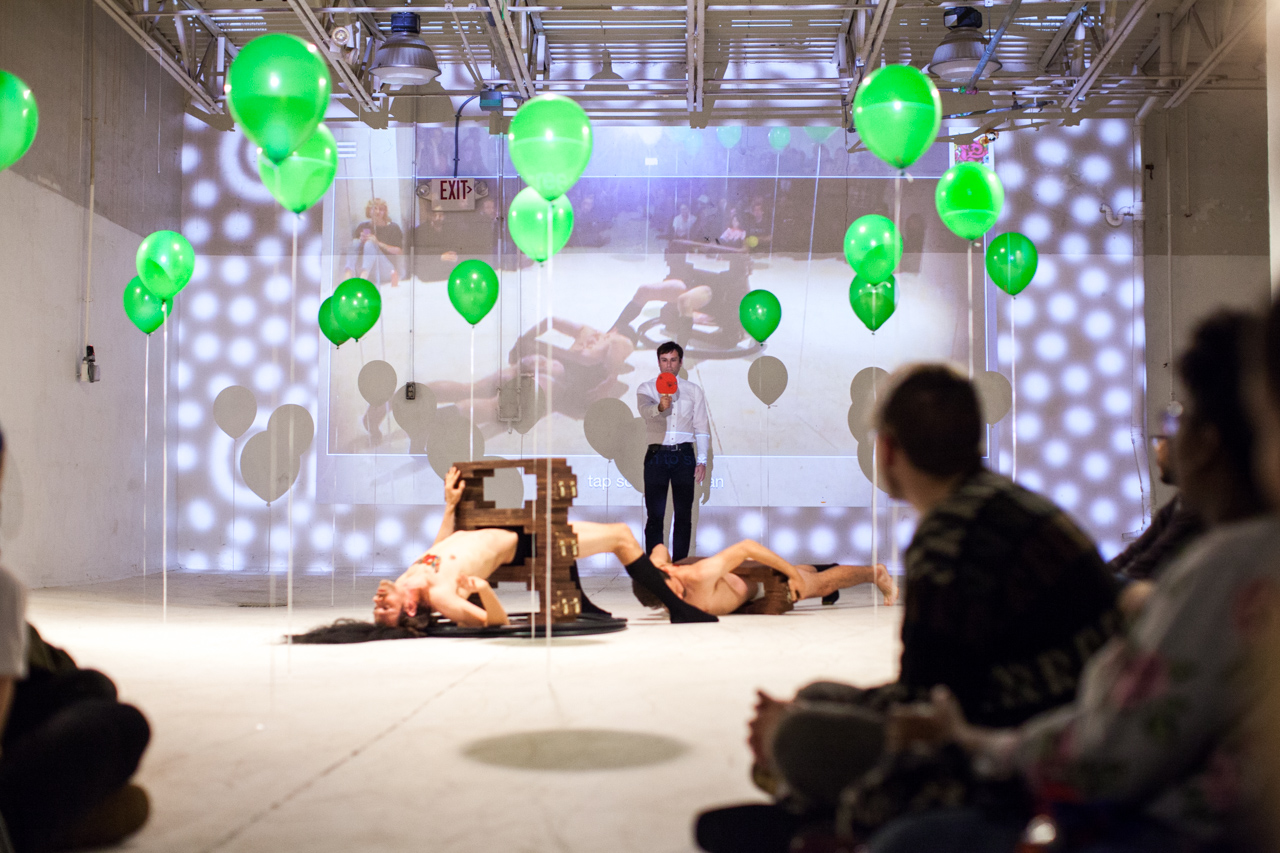 With Mark Jeffery and Judd Morrissey

Anatomical Theatres of Mixed Reality (ATOM-R) is a Chicago based collective exploring 21st century embodiment through performance, language and emerging technologies. The work mixes the live body with ubiquitous computing through DIY interactive sets and an implementation of Augmented Reality (AR) in which virtual content is overlaid onto bodies and spaces through the use of a smartphone app. Formed in 2012, the group is currently comprised of co-founders Judd Morrissey and Mark Jeffery with performing collaborators Justin Deschamps and Christopher Knowlton.

Judd Morrissey is a computational poet and interdisciplinary artist. He creates large-scale projects with multiple outputs as Internet art, digital poetry, live performance, and site-responsive installation. He is an Assistant Professor in Art and Technology Studies and Writing at the School of the Art Institute of Chicago. His work is shown internationally and has been studied widely by scholars and theorists of electronic literature. He is a recipient of acknowledgements including a Creative Capital / Andy Warhol Foundation Arts Writers Grant, a Fulbright Scholar’s Award in Digital Culture, and a forthcoming Gray Center Mellon Collaborative Fellowship for Arts Practice and Scholarship. More info:

Christopher Knowlton is a dancer, choreographer, movement artist and scientist based in Chicago. He is completing a Ph.D. in Bioengineering at the University of Illinois at Chicago and researches motion analysis and joint replacements at Rush University Medical Center. His own choreographic work has been featured throughout Chicago as well as internationally, most recently at Danscience Festival in Australia and FITSA Dance Festival in Mexico. As both a scientist and an artist, Chris’s work investigates how movement can convey intrinsic and extrinsic factual information that often incorporates elements of dance, storytelling, film, and lecture/demonstration.

Justin Deschamps is a dancer, performer and licensed practitioner of therapeutic body-based practices. He trained with Pittsburgh Ballet Theatre and between 2002 and 2006 apprenticed with Richmond Ballet and performed with the Ballet Theatre of Maryland. Arriving in Chicago in 2006 to perform in Iphigenie en Tauride with the Lyric Opera, Deschamps has been able to explore and diversify his craft within the rich performance community, working with such companies as (Ameba) Aerial Dance Chicago, Lira Polish Folk Ensemble, and Hedwig Dances before becoming a core member of ATOM-r in 2012.